I was looking for a solution to play video on my vr headset ($3) Samsung 8 in some viewer, aka the cardboard vr. First I thought that I would just view them over the network, but my rooted chosen ROM (Linage 17) doesn’t support smb from boot, so no fstab mapping can be done leaving me with a hacky file browse and view by another app solution.

Then by chance playing with my TV and trying to watch films on the computer I finally found a use for a UPNP/DLNA Server. I found also my VR apps that any for of networking found the uPNP/DLNA server no problem, not smb loging on etc, sweet!

Looking at the Windows uPNP offering I found none, for free or paid for, they could not make a custom menu from meta data tags. So Linux… Gerbera free and claimed to be able to do this so I had a go. A bit of hack trial and error later I got it going how I wanted with a sort of 2 level keyword search and reading all the tags I need to sort the collection. I meta tagged all my MP4 video with Mp3Tag v3.01, which is excellent util for the meta tagging via many different ways and easily expandable due to a simple text based plugin type feature. 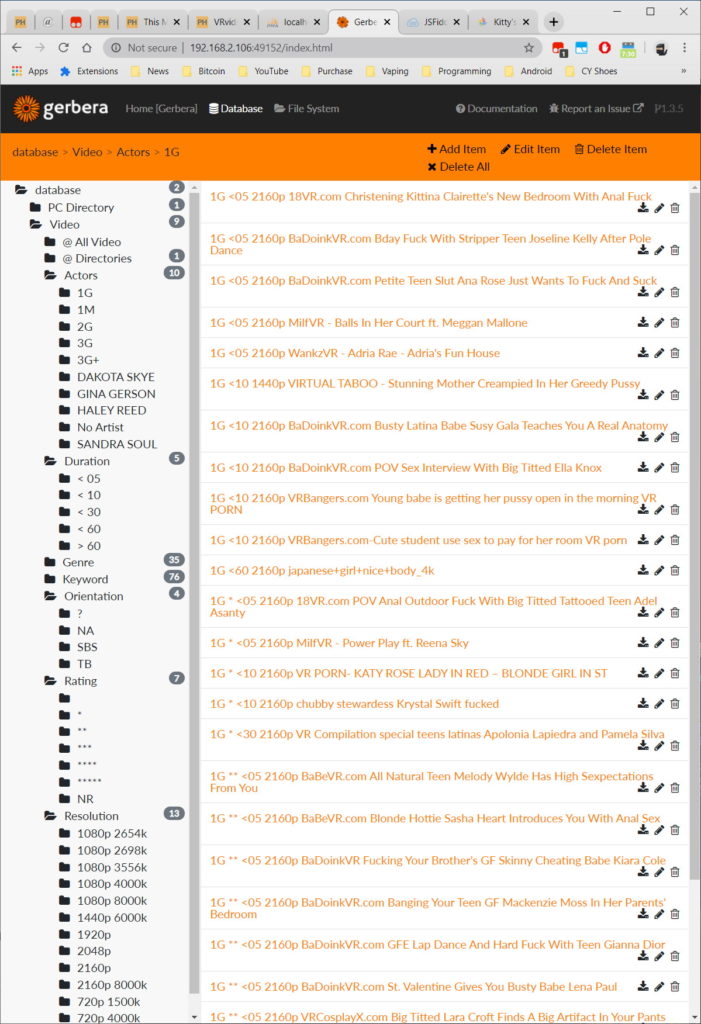 I leave it here so maybe it’ll help someone else.
END_OF_DOCUMENT_TOKEN_TO_BE_REPLACED

This Javascript Greasemonkey script will highlight a domain name in google results pages in both image search and standard search. This is of course freeware.

END_OF_DOCUMENT_TOKEN_TO_BE_REPLACED

You will need to install Grease Monkey to use this, which is a plugin for Firefox. I have not tested this script in any other browser.

This is a Firefox plugin that will auto play the Blood Series of Games. It seems that most facebook games revolve around two boring concepts. Invite as many people as possible to the application and log on as often as possible.

If you do these then in many “games” your position will be stronger.

I wrote this application and got to the top 10 in all games before turning it off. People had become suspicious of my speedy rise and I didn’t want to get my account banned….. Hmm, maybe I should have, I don’t use facebook for anything useful anyway.

So Here we are the source code for Blood Automation the bloodwars auto player. If installed you can run it in firefox as is as there is no compile done at all.

This is a Firefox Plugin. Once Pluged in as you can see from the screenshot you can configure BloodAutomation to play the entire game on cycles questing, attacking others within parameters, automatically spending your cash etc.

The hit list was never fully implemented, but you could. The code is fairly messey as I had never programmed anything of substance in javascript, never used crome or DOM before. A complete write would make it nicer, but hey, It works without error, well it did, they have probably changed the page layout now so that some variables can’t be found.
Image

This code is the guts of another firefox plugin I wrote to Auto add face book users who had the blood wars application installed.

The blood wars application exposes the FB user ID in a very simple way to collect. This application goes through the war.php pages and collects the user ID exposed there. it collects 10 and then goes to http://www.facebook.com/addfriend.php?id=+UID and pastes a generic relevant please add me to your friend list message.

It does this on loop until a message is displayed telling you you may hit a limit.

One could harvest thousands of these ID and then use multiple accounts to make “friends” with all these people and then use another bot to data mine all their private information. People simply don’t use the privacy options, or can’t find them all because they are so spread out.

END_OF_DOCUMENT_TOKEN_TO_BE_REPLACED

Ok so if you have hundreds of people asking to be “friends” with you then you’ll need some program to click ok for you else you’re life will drain away.

This code, partially borrowed from elsewhere as you can see from the comments will auto add everyone who has requested you as friend on facebook. It will add them into a group numbered as the index of the dropdown.

This is the complete code for the core of a plugin for firefox. If anyone actually wants it to install let me know here and I’ll make some install instructions and a better package.